I've been trying to crack the Elf/Faerie class for something like a year and a half now, and I think I'm starting to zero in on something. This post is an effort to develop that a little by thinking out loud.

In B/X and its race-as-class progeny, Elves are pretty straight-ahead Magic-User/Fighters. Which is fine, but I think pretty flavorless on its own. When approaching my restatement of this class, I've tried to keep two main points of reference in my head.

A couple of other models of Elf I have kicking around are actual Tolkien elves, something more like aliens (lost time, for example), the Drow monster/D&D race, and D&D classes like the Ranger, the Druid, and the Cleric. I dropped the Cleric class entirely and expanded the magician (magic-user) to cover some classic cleric functions, and the Thief class could easily be played like a Ranger, but there's nothing wrong with a little overlap.

I'm trying to fit the above influences into the loose template I've established, which is that each class includes:

The only class so far that really breaks that mold is the Magician, which gets a whole separate booklet of spells. I'm fine with that partly because it's the exception that helps establish the rule and partly because it actually fits with the book-learning paradigm of magicians.

The problem with the Elf is that there are a lot of special abilities I want to fit into the class in order to have it evoke the kind of feel - and variety of influence - I'm going for. The way that I'm handling that right now is with a random table of abilities to roll on at the first level and every even-numbered level afterwards. My thinking is that the randomized thing fits fairly well with the unpredictable faeries of JS&MN. There's also the fun of surprising the player a little with an unusual ability.

But I would love to figure out a more elegant solution, even if that involves killing my darlings to some extent.

I'm still searching for the solution, and I'd be grateful for any feedback, but in the meantime I'll post the most recent Elf special ability random table: 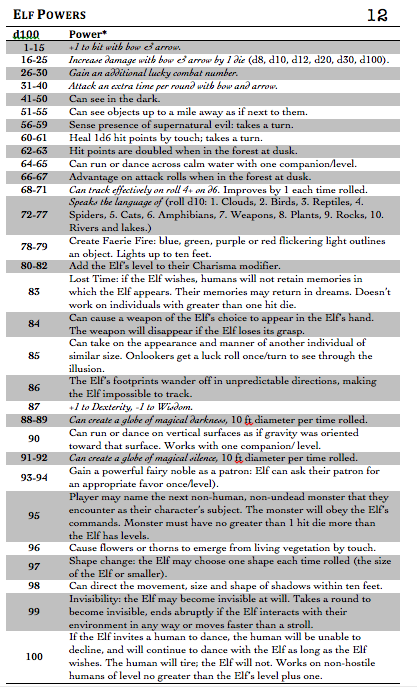