Here is the two-page spread of character class introductions. 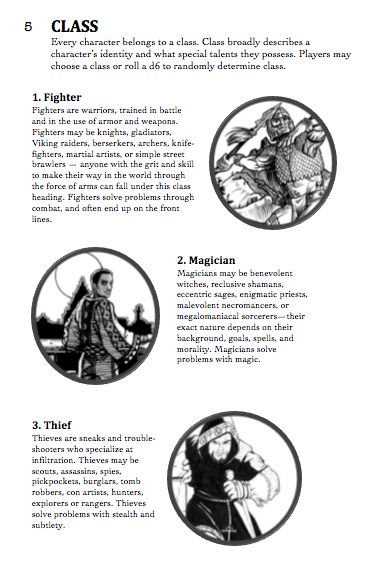 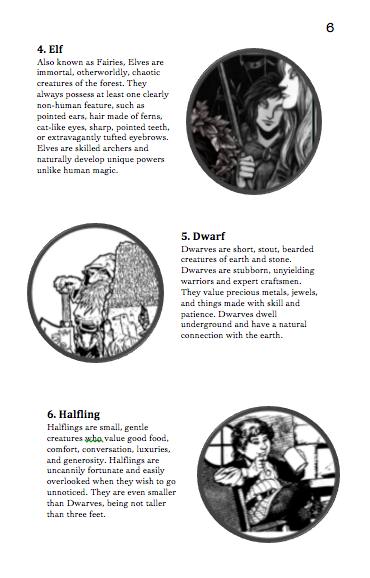 Posted by Crawen at 5:02 AM No comments:

I've been working on a D&D house rules set for a couple of years now. The goal is to have a booklet-style set of character generation rules and basic adventuring rules that I can use to teach new players the game. I tend to play with a lot of non-gamers, and my players don't often have the time or inclination to read a rule book- even one aimed at simplifying the traditional rules as much as possible, like Swords & Wizardry. Additionally, there are a number of house rules that I like to play with, and I've enjoyed the chance to examine the house rules that I'm interested in and see which ones actually fit my play style.

I've freely stolen from a lot of sources for these rules. They're B/X style in that they're race-as-class. LotFP influenced in the attack bonus rather than to-hit matrix and ascending AC. OD&D in that all weapons are d6. The spells and basic magic system is pretty much Wonder & Wickedness. I'll credit the house rules and class inspirations as I post them. Oh and I used a lot of art from Scarlet Heroes and Spears of the Dawn, as well as old TSR art and random stuff from google image searches. If I ever do more formal publishing I'll go back and fix that.

I'd be grateful for any feedback. At some point I'll post all the materials- they're formatted so that you can print them double-sided, fold them, and have useable booklets.